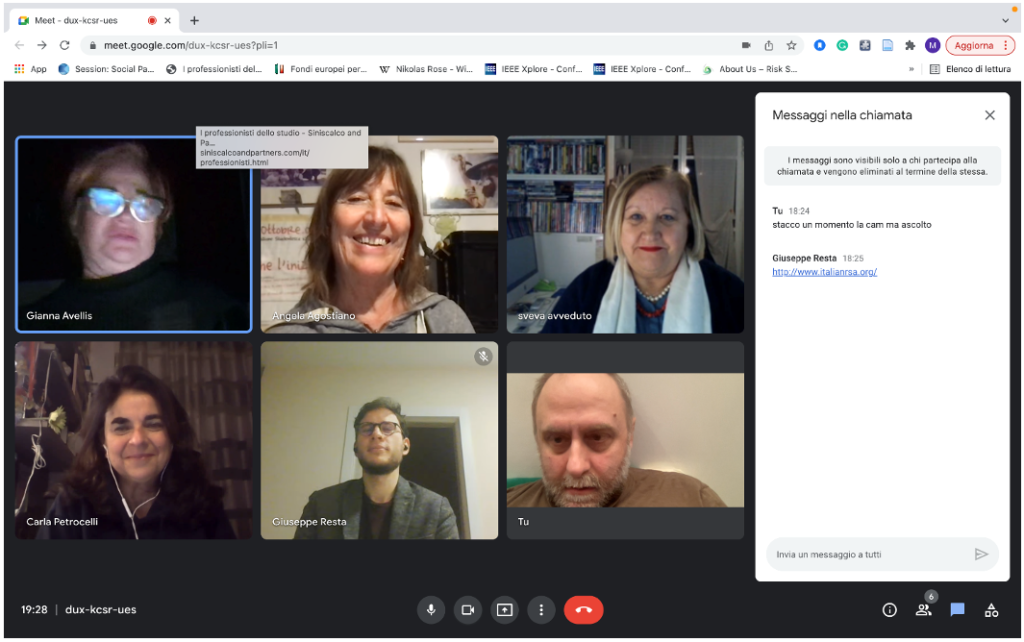 The Board Meeting starts at 18.00.  Avellis welcomes the participants and the Agenda is approved. Avellis asks to publish on the website of ItalianRSA www.italianrsa.org the twitters from the board members.

Action: Avellis will send the credentials to access to the twitter webpage of ItalianRSA to all the board members.

Avellis open the discussion on the legal structure and juridical form of the new born ItalianRSA. This is important for having a PIC number to participate to European projects. Avellis mentioned that this was one of the reasons why ItalianRSA do not participated to the SECURE EU project proposal of ICoRSA as it has no PIC number yet.  Sveva Avveduto mentioned the legal structure of Donne e Scienza as voluntary cultural association with a PIC number. The CREIS is an APS (Associazione di Promozione Sociale), but ItalianRSA cannot be an APS as it includes other associations that in turn are APS, such as CREIS, and because APS is very demanding one as it needs a strong administrative structure that ItalianRSA has not at the moment.

The website has been demonstrated and Resta has asked for updates on the contacts of the RSA Members page such as the one requested by Massimiliano Ruzzeddu to change the general email info@creiseuropeanresearch.it to his personal mail mruzzeddu@gmail.com  . Resta inquires on how to structure the communication. According to Avellis, it is the Secretary who has to manage and update the list of members. Petrocelli proposes to insert our posts in the social media for better communication and Camisasca undelines the importance of LinkedIn for the researchers’ community. Avellis proposes a newsletter but the followed discussion made it a too demanding task and would not impact the researchers as much as the social media. Camisasca points out the importance to communicate the aims of ItalianRSA to the researchers. Avveduto proposes to focus more on the website and to populate it with as much twitters and contents (such as News, …) rather than the newsletter, and to have an annual report on the work done.

Action: All members will send their News (on the researchers career, presentation of ItalianRSA in workshops and conferences, events of interest, …) via email with some pictures to Dario Fazio who will insert all the News in the website.

Agostiano asks whether the News concern only the association or the research topics in general, such as the new forms of doctorates in Italy. Ruzzeddu points out to explain Who we are and What we do more in depth. Petrocelli would like to categarize the type of information that we will provide on the website. Ruzzeddu states to collect the researchers’ issues. Avellis proposes to do mentoring for the Early Stage Researchers with the aid of the portal www.therolemodels.net.

Agostiano states the need to define our target members especially in relation to other existing associations of researchers in Italy such as ADI (Associazione Dottorandi e Dottori di Ricerca in Italia). Avellis mentioned that ADI has been contacted but we did not receive a feedback up to now. Avellis points out how being a member of ICoRSA, ItalianRSA can easily bring in the Italian context the research policies of ICoRSA.

Action: All members will investigate how to involve more Early Stage Career Researchers in ItalianRSA from academia and industry.

Avellis mentioned that one of the advantages of being member of ICoRSA is for Italian Researchers to do networking with other researchers of the ICoRSA Research Staff Associations, such as in Portugal, Spain, France ….  Resta proposes to focus on the postdoc researchers. Agostiano mentioned the new professional dimension of the PhDs, who can take a career not only in the academia but also in the Public Administration, Industries, etc. Petrocelli undelines that also the PdH evaluation will change accordingly.

Avellis addresses the Agenda point of Science Cafè as meeting point with all the researchers in the Campus area of University of Bari, Villa la Rocca, site of the Accademia Pugliese delle Scienze, member of ItalianRSA. The project has been sent to the All members before the board meeting and the project of the Science Cafè on Women in Science and Innovation was approved. ItalianRSA will fund the coffee breaks during the events. The project will be a submitted to the board of Academia Pugliese delle Science for approval. The board agreed to add to the Objectives of the project the one to create a Documentation Center and to do mentoring to the high school girls.

Action: All members, when approved by Accademia Pugliese delle Scienze, organise the first event planned by the end of June 2022 on “Women and STEAM”. Planned events in 2023 are on “Women and Climate Change and Environmental Sustainability” in Rome and “Women and Scientists for Peace”.

In order to attract more postdoc in ItalianRSA Avellis proposes in collaboration with Marie Curie Alumni Association Italy Chapter to organise in this event a brief introduction to MCAA and the Marie Curie application forms.

A future initiative for 2023 will be in Rome on the Sustainability. Ruzzeddu mentioned his group  SPE on sustainability. The Science Cafè should be also at the National Level  and Avveduto proposes to start in 2023 with this topics to organize one event per year. It can be done in conjunction with the next AGM of ItalianRSA.

Avveduto will be speaker in the ICoRSA Summit, but received no news until now.

Action: Avellis will ask a more detailed agenda to ICoRSA on the Summit.

Avellis addressed the Budget point in the Agenda, and proposes to address the FUTURA Call of Apulia Region Deadline 10 May, 3k euro.

The current budget of ItalianRSA is 7k euro transferred by  Marie Curie Fellows Association (MCFA) the first association in EU of researchers who holds or have hold a Marie Slodowska Curie grant. This association closed in 2021, as many of their members were already working for the new association funded by the EU Commission Marie Curie Alumni Association (MCAA). To this end, it will be organised a side event in collaboration with ICoRSA AGM this year to celebrate 25th anniversary of Marie Slodowska Curie Action achievements. Place to be defined. It has been planned in October and 3k€ will be devoted for the organisation of the event.

1k have been spent for the website design and implementation to AMBO ADV, with the maintenance and hosting of the website included for 5 years.

0,3k have been spent to maintenance and hosting for 3 years of the portal www.therolemodels.net as agreed with MCFA.

0,1k has been proposed by Avellis to spend on the site of ItalianRSA, namely Tecnopolis CSATA Novus Ortus  Science Park, which includes a telephone reference with a secretary (Italian and English) the availability of a meeting room for monthly meeting, and a room for conference (1 per year). Avellis requested to be put to the vote and it was fully agreed by all members.

Action: Avellis and all members will define by email a detailed plan of activities with the actions to involve young researchers in ItalianRSA as first priority, especially through the website-

Next Board Meeting has been decided at the beginning of June.

Action: Avellis will circulate a doodle for the next board meeting